So, there are the principals and vice-principals and teachers at Mount Si high school and at Issaquah High school.  There are other staff.  I don’t know how many teachers they have, but statistically, a complete outsider might guess that one or more of them are not exercising much. I know that would be just a guess and I also know that at the gym where I walk, there are some guys who are a bit heavy and may be in the process of lightening up and I commend them.  (Everybody has difficulties in life and we start where we are .  . .) According to the statistics for adults and exercise, though, about 3/4 of US adults do not walk more than a few hours a week or lift any . . .  Hmmmmmmmmmmm . . .  So, you wonder if 5 hours of walking might make a difference.

Do they have a motivation to do so? [I am assuming that there is one–at least one of the staff–who perhaps could exercise more regularly.  I know that when I went to high school, there was one.  She was our ****** coach and ******* teacher in other classes . . .]  Do contests or exhibition times provide a motivation that some people lack?  I can’t imagine if there being some contests was bad for Mindi Jensen of Utah.

A new government study estimates that nearly 80 percent of adult Americans do not get the recommended amounts of exercise each week, potentially setting themselves up for years of health problems.

Researchers at the Centers for Disease Control and Prevention (CDC) analyzed survey data collected from more than 450,000 U.S. adults ages 18 and older who were randomly phoned across all 50 states.

They were asked how often they engaged in aerobic physical activity outside of their jobs and for how long.

The U.S. government recommends adults get at least 2.5 hours of moderate-intensity aerobic exercise each week or one hour and 15 minutes of vigorous-intensity activity, or a combination of both. Adults should also engage in muscle-strengthening activities like lifting weights or doing push-ups at least twice per week.

So, statistically speaking, it is at least somewhat possible that there is a teacher or two at some high schools who are not setting a good example for the kids . . .

Should motivation be limited to the 20 girls who are cheerleaders, 20 girls who are on the drill team and 30 gymnasts?  Does anyone have any ideas that might provide motivation to kids or teachers to walk or train?  What, in all of England, by the furthest stretch of the imagination, could possibly provide some stronger motivation to exercise a bit, for those who do not exercise much now?

Here is Mindi Jensen, a loving family mom and a teacher. Of course, I have no idea if she would benefit from competing  . . . 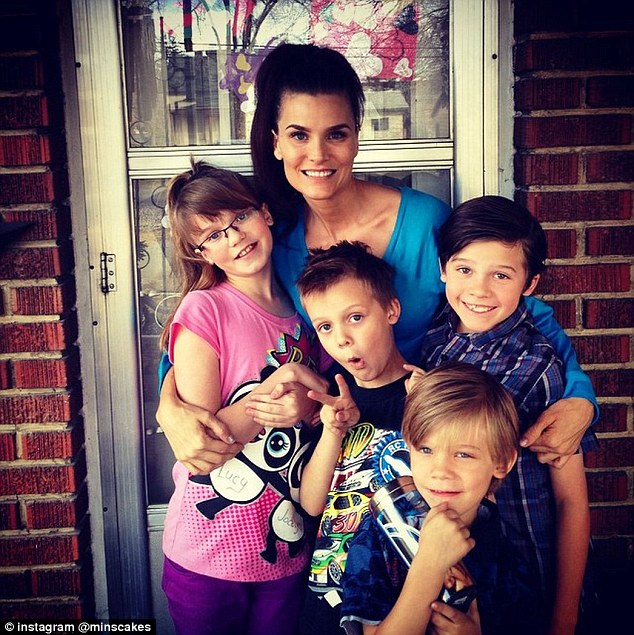 Uh, oh, whoops . . .  I’ve seen a page or two on the web that says Mindi exercises . . . She might be stronger than I am.  I can’t imagine if that would help in any way . . . Probably not, but you never know . . . I assume she is not Miss bad teacher . . . though the school administration was not enthused at first. 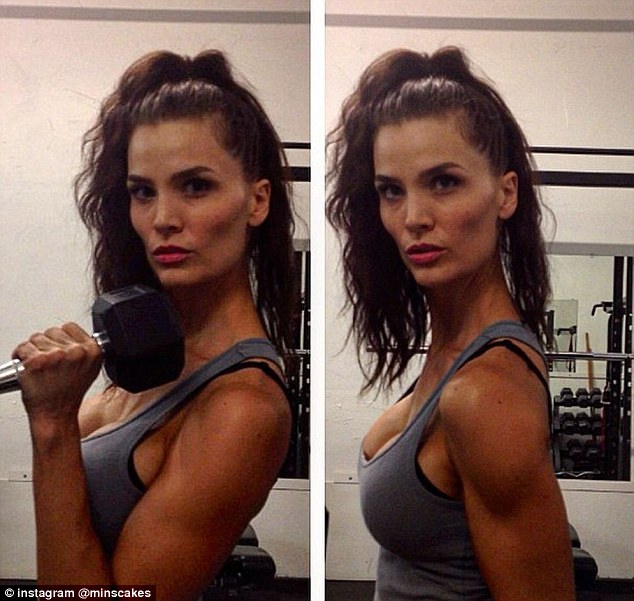 The average adult American watches about 3 hours of TV a day per the governmental statistics. Though  I think I have read differing statistics that claim it is a higher amount–I am not sure why there is that difference in estimate.  I try to do at least some TV watching on a treadmill . . .

DATA SHOW AVERAGE TIME DEDICATED TO EACH ACTIVITY FOR HOUSEHOLD MEMBERS AGED 15 AND OVER. SLEEP TAKES UP 8.7 HOURS ON AVERAGE. SOURCE: BLS AMERICAN TIME USE SURVEY.

UNIVERSITY PARK, Pa. — Americans spend, on average, only about two hours each week participating in sports and fitness activities, according to researchers at Penn State and the University of Maryland who examined U.S. government data from the American Time Use Study.

“The United States is the fattest country in the world,” said Geoffrey Godbey, professor emeritus of recreation, park and tourism management, Penn State. “The amount of exercise Americans get has become a major concern.”

The researchers found that dedicated walking is the most prevalent activity, engaged in by about 5 percent of Americans on an average day for 53 minutes per walker.

American women, age 15 and above, spend less than 15 minutes a day, on weekdays, on average, in exercise and/or participating in sports.  Ok . . .  ok?  So, rexercising class in high school, somehow, isn’t resulting in lifelong, ongoing physical activity, either “just reasonable physical activity,” or enough to compete in a contest.  Reading, writing and the old ‘rythmatic that the kids learn in school usually does result in reading, writing and rythmatic (or using a calculator) after high school.  At least at Mount Si and Issaquah High School I really do assume that reading, riting and rythmatic is used by the kids after graduation.

Junior high, middle school and high school PE classes together with parent and other influences, results in, on average, one in three person in the USA being obese and two in three persons being overweight.  The average daily time in exercise for women in America, on weekdays, is less than 15 minutes, per governmental statistics.

So, we hope that the girls at Mount Si and Issaquah will become the exceptions to the general course of events . . . and some of them are exceptional . . . but for whatever reasons, for some of them, exercise, walking, dancing, pole fitness and barre classes are not something they will do much of as adults.

In other words, PE class (such as one might have found at my old high school) is maybe somewhat fun for some of the kids.  However, for most of the girls (or boys), it doesn’t become something they continue, statistically speaking, to do as adult women (or men) . . .

We do have the photos of adult staff of Issaquah in a news article in the Issaquah Reporter . . .  If we were being uncharitable, we could make an educated guess about ********************* exercise and/or gymnastics competitions, about bikini competitions or barre classes or pole dancing or any other classes of types. But I would not make any guesses about anyone I do not know and have not spoken with . . . and some people have begun to exercise and it simply does not show up much yet.

Of course, some people have health conditions that make it difficult or painful to walk, and I am happy to pray for them or others that God help them or maybe even that God heal them or God do whatever is best for them.  I don’t know that God will show up, but I will pray because everybody I know that has problems deserves to know that I or someone cares.

So, the school admin can be irritated about a fun contest that considers some girls to be hot . . . and for 75% or so of the young women in school who graduate and do not exercise, walk or go to the gym after graduation, what of them?

The girls and boys I knew in high school wouldn’t normally go to barre class.  Most of them wouldn’t know what it is.  Is that something good for your health that some adults do and that some girls and women might be motivated to do, if they knew more about it?

The girls and boys I knew in school would not normally have gone to pole fitness class or known what those are.  Would some of them do it if they knew more about it?

In some schools, part of PE is learning to bowl and then, afterwards, never bowling again.  Should part of growing up include learning to be pretty and graceful and to enjoy that for the rest of your life, and to do that knowing that Shakira, Ariana Grande and maybe even Skylar Stecker at age 13 may defeat you in a contest?

I don’t know, but the schools right now are reaping 2 in 3 american adults being overweight . . .  Even some people on the richer “Eastside” of King County are heavier than healthy . . . You kind of reap what you sow . . . I can’t imagine why that is . . .

Above are some younger girls who at least have a chance in a contest with radio personalities and an occasional piano teacher . . . though the break dancing is not my favorite, and yet in a few years, some of them might do well in some other contests . . . which of course could have no name . . .  *** or ***.

It is quite possible that a few of the girlz above will not need, as adults, to try the 30-10 weight loss plan . . . but who knows?

If the school does not like the idea of a Hot or not contest, is the above video tame and innocent enough for the girls to produce it and guys to enjoy it? . . .  Except that, in the hands of the 14 to 17 year old girls at school . . . the girlz video might in fact be even more ***.  I actually like the music for Girlz . . . Could we add 3 years and some maturity to the age of some of them in some fun covers of Girlz to be produced?

I have one of those cars that is a little fancy enough to have a satelite radio. I just had the Sirius radio turned on. For several months, my listening had been a mixture of kvi, 101.5 and sirius hits on 001.  I had the Sirius radio turned on and on Radio Disney there was Shakira out with a new song.  For some reason, this new Shakira song has not been on the hits channel . . . Is it because the song is new or because it is too soft for the hits channel?  There is a part of Bible verse related to this song . . . for the righteous falls seven times and rises again Prov 24:16.

Anyway, I dislike speaking of difficulties some other people might have without having an encouraging thought.  Encouraging thoughts are sometimes better than brackets with Ariana Grande, Becky G or Skylar Stecker . . .  but afterwards, perhaps we could consider Bo$$!

Once in a while I do pray for those who I perceive to have difficulties in life . . .  Why not be nice to them?  But I am not also certain if I should intrude by indicating . . .

So, do they listen to this one in Snoqualmie?  We shall it is not too black!

For those who would like something a bit older than Girlz . . . Stefy, Chelsea and Shakira . . .